The South Main Street Historic District has over 80 houses and buildings constructed mostly in the late 1800’s to the early 1900’s, with some dating back to the early 1800’s. Many of Middletown’s most prominent citizens built their homes on South Main, including Middletown’s first settler, Daniel Doty (prior to the existence of the street), U.S. congressman and industrialist Paul J. Sorg, and American Rolling Mill Company founder George Verity, to name just a few. The grandeur and stylistic diversity of the architecture in this area distinguishes the South Main neighborhood as one of the most outstanding historic districts in the Midwest. In recognition of the excellently preserved architectural qualities of the homes and businesses in the neighborhood, it was listed on the National Register of Historic Places in 1978.

The history of South Main and of Middletown is the history of the American Midwest. From the days of Native American cultures and European traders, to the original settlers making their way via the rivers Ohio and Miami, through the evolution of human thoroughfares (rivers, canals, railways, highways and airports), through industrial booms and recessions, to modern times with international celebrity athletes and authors, our history mirrors the history of all major Midwestern population centers. 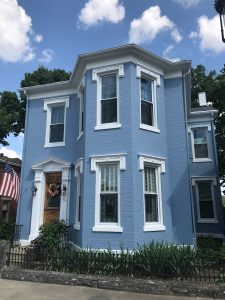 The South Main Street Historic Neighborhood Association, also known as “PRISM” (Preservation, Restoration, and Improvement of South Main) is a 501(c)(3) nonprofit organization that was formed almost 50 years ago to promote improvements, preservation and security in order to provide for a higher quality of life for our residents. Today, South Main residents proudly carry on the traditions of our predecessors by staying involved in the community, hosting social gatherings, offering public walking tours and other fundraising events, and carrying out neighborhood beautification projects.

We welcome you to visit the South Main Street Historic District and experience a historic gem of the Midwest!